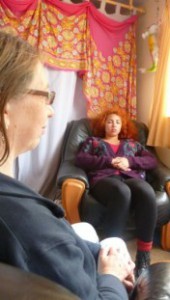 Hypnotic or suggestive therapy is the oldest of all healing techniques. From the Sleep Temples of Egypt through the histories of ancient Greece & Rome there is evidence that some form of hypnosis has been used in healing.

In the 18th Century, when it was believed that illness was caused by the magnetic influence of astral bodies, Franz Anton Mesmer would induce people into a trance-like state by what he mistakenly believed to be animal magnetism. Although Mesmerism was soon discredited it continued to be used after Mesmer’s death as it often produced miracle cures.

When James Braid re-examined Mesmerism in the 19th Century he discovered that simple suggestion was just as effective for inducing trance-like states. He coined the phrase hypnosis and put the techniques used onto a scientific footing.

In the early part of the 20th Century hypnosis was used almost exclusively by stage hypnotists thereby projecting a distorted view of this very powerful therapeutic tool.

In the 1950s & 60s American therapist Milton H Erickson developed a modern form of hypnosis which helped him make health improving suggestions to patients in a trance state.

In 1955 the British Medical Association endorsed the practice of hypnosis in medical school education, since when it has become a valuable & effective addition to conventional medical treatment.

The Face Behind Love Your Life

Hypnotherapy: Driving test failure
By the time I went to see Ghislaine I had failed my driving test 3 times and I was facing my 4th attempt. I was very nervous as the last attempt had been a disaster. We discussed the situation regarding my 3 failed attempts and Ghislaine then proceeded with the hypnotherapy session. The following week I not only passed my test but did so with only 2 minor faults. I went there feeling so calm and confident I just knew I would pass. Without hypnotherapy I know the results would have been so different

Hypnosis for Weight Loss
I had been battling with my weight ALL my life and had tried every diet there was, always with the same results. I decided to give Hypnotherapy a go after a friend recommended Shropshire Therapies to me. She was having great success so I bit the bullet and went along After the first session I was eating both fruit and vegetables, which I had never done. The strangest thing was that I was almost unaware that I was doing so it all seemed so normal and natural. There have been no cravings, I don’t want to snack between meals and I am eating much more healthily. Using hypnosis to help me lose weight is making sure I adopt a healthy life style. It isn’t about dieting and the stress of failure Its been amazing

Energy Healing for Animals
A friend recommended Shropshire Therapies [Now ‘ Love Your Life’ Ed]to me after my 14 year cat was diagnosed with chronic kidney failure. Before I saw Ghislaine he had been listless and off his food. After he had his healing session he went straight to his bowl to eat and a few hours later he was positively bouncing with energy.

Violet Treatment Package
Had fantastic treatments last night from Ghislaine Headland-Vanni, slept like a log last night and have felt energised today and got lots done! It’s great being surrounded by such expert services!

Ascension Therapy
Your treatment has helped me a lot, particularly the message you received. It was great to hear it confirmed and has given me some strength to walk my path without fear. Many many thanks

Hypnotherapy
I recently used one of many of Ghislaine’s fantastic services, and underwent my first session of Hypnotherapy. Ghislaine made me feel relaxed, calm and comfortable in my 1st ever Hypnotherapy session which I feel is hugely important when undergoing any kind of therapy such as this. She was patient, and has a wonderfully gentle voice that eases you into your unconscious state. I have since noticed positive results and as and when I need to go back, would definitely go for another treatment. Highly Recommended!!

Hypnotherapy
Hypnotherapy with Ghis was such a lovely experience! boosted my confidence and feel 100% better. Fully recommend it.

Sleep Download
hey ghis, just wanted to say a big thank u for the hypno mp4 u’ve send me. started actually using it 3 days ago and it really does make me fall asleep. u’re amazing!

Hypnotherapy
I was initially sceptical as to the effectiveness of hypnotherapy, however, Ghislaine’s expertise and thoroughness as a clinical hypnotherapist proved me wrong. Highly recommended.

Hypnotherapy for stopping smoking
No matter how strong we think we are, how much we work with our own minds there is always a place for additional help and support. Having been a smoker for many years I went to Ghislaine for Hypnotherapy, it took two sessions, but 9 months later I have broken a habit that I lived with for almost 35years. I am proud of my achievement and that I had the sense to seek help. It worked – now a converted non-smoker..